Way back in February 2016, after wading through my computer for a good old fashioned spring clean, I ended up editing and posting some history material that never quite made it into my PhD – mostly due to length and relevance issues. Continuing my adventures of delving into the folder helpfully labelled ‘UNUSED WRITING’, here’s another piece that’s been repurposed for my blog after a period of deep hibernation. Enjoy!

Note: I have gone out of my way to exclude any visually explicit content in this article. However, the topic itself obviously may not be considered child-friendly, and possibly won’t be to everyone’s taste regardless. Please proceed with this understanding.

Where the word really gets interesting though is in contrast to how it was first conceived, and how it truly did metamorphosise over the years (for which part of my research I relied heavily on Mark McLelland’s 2005 publication, Queer Japan from the Pacific War to the Internet Age, as well as his January 2010 article in Issue 23 of Intersections: Gender and Sexuality in Asia and the Pacific, titled ‘Constructing the “Modern Couple” in Occupied Japan’). See, in contrast to its current pornographic usage, the term was actually first used in the context of the developing science of psychology in the early 1900s – primarily to describe disorders such as hysteria, but also to refer to paranormal abilities like telepathy and hypnosis. It was initially only circulated among medical specialists, but by 1917 was being popularised in journals such as Hentai-shinri (Abnormal Psychology); a semi-academic journal published by the Japanese Association for Mental Medicine.

An important point to make here is that, for a while at least, being sexually perverted (at least by the standards of the time) was not necessarily perceived as an entirely negative thing. It was the perversion rather than the normality of sexuality that was being obsessively discussed in popular texts, so the impression was that this perversion was not only omnipresent but even somewhat fashionable within a certain subculture – for some, a sort of edgy or alternative pastime. However, as public curiosity in such depictions of sexuality gradually resulted in ever more explicit detail, “what started out as prescriptive literature quickly lost the blessings of educators and police and thus descended into the underground culture” (Donald Roden, ‘Taisho Culture and the Problem of Gender Ambivalence’, Japanese Intellectuals during the Inter-War Years, p. 46). In the 1930s, the genre came under more intense scrutiny by the government as Japan increased censorship and made ready for war, and due to paper rationing, publication was largely suspended altogether by around 1933.

Post-war Japanese hentai again saw a boom though, as the Japanese press felt free to dispense with the more conservative patterns that went alongside wartime literature and instead begin an exploration of more decadent themes, including a whole genre of ‘nikutai bungaku’ (carnal literature). The physicality of the body was emphasised over more social and moral concerns; a position at least partly encouraged by the development of low-grade pulp culture magazines that earned the nickname ‘kasutori’ – in reality a poor-quality alcohol distilled from sake dregs which reputedly caused consumers to collapse after only three glasses, just as these magazines were likely to flop after only three issues. Nonetheless, these kasutori magazines were proof positive that there had been a radical break from the past. Pre-war Japan had emphasised modesty and sexual reservation in public, particularly for women. Post-war Japan, on the other hand, presented the female body in a way that would have been unthinkable in previous decades. In contrast, this new environment placed a far bigger demand on fulfilling the emotional and sexual needs of couples, resulting in a call for further awareness of sexual practices and sexual pleasure – to which kasutori magazines happily catered.

By the 1950s, a sub-genre of hentai seiyoku focusing on heterosexuality as well as both male and female homosexuality had developed, along with a range of supposedly associated fetishes such as sadomasochism. Ningen Tankyuu (Human Research), Fuuzoku Kagaku (Sex-Customs Science), Fuuzoku Zoushi (Sex-Customs Storybook), Ura Mado (Rear Window), and Kitan Kurabu (Strange-Talk Club) were all magazines that indulged in the discussion of these fields, though most would cease publication by the end of the decade. They were characterised by open discussions between doctors, editors, writers, and readers, and by reports from people who defined themselves as ‘abu’ (abnormal) in terms of sexual desire. Reader columns were created to encourage the critique of articles and exchange of ideas, but they also functioned as a place to share sexual fantasies and act as personal advertisements, giving readers with similar interests the chance to meet. 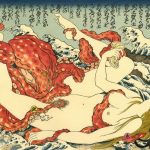